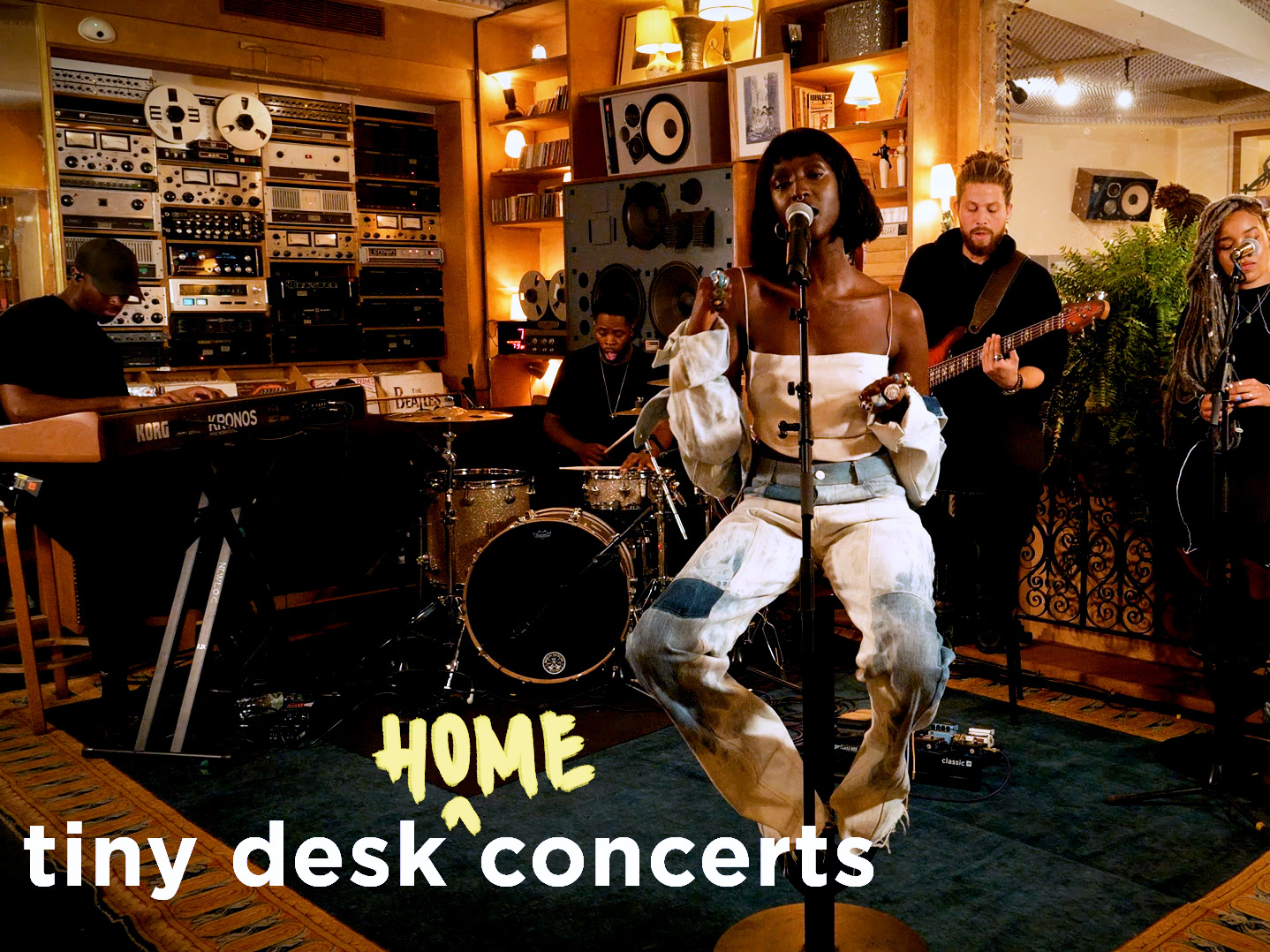 The Tiny Desk is working from home for the foreseeable future. Introducing NPR Music's Tiny Desk (home) concerts, bringing you performances from across the country and the world. It's the same spirit — stripped-down sets, an intimate setting — just a different space.

There's an elegant vibe as Lous and The Yakuza perform a Tiny Desk from the Book Bar in the Hôtel Grand Amour in Paris. And while the music is smooth, upbeat and warm, what lies beneath in Lous backstory, in her French lyrics, is, at times, deep and disturbing.

Lous — an anagram for "soul" — is Marie-Pierra Kakoma, a 24-year-old artist based in Belgium but born in the Democratic Republic of the Congo. She came to Belgium because her family escaped war in the Congo. They were refugees. For her Tiny Desk (home) concert, she opens with her 2019 single, "Dilemme." The song conjures up images of growing up in the Congo and Rwanda: "Living haunts me, everything that surrounds me made me mean," she sings in French. Her songs are often set to Congolese rumba rhythms, filled with resilience, beauty and resistance.

These songs come from her 2020 album, Gore, and are steeped in a life that saw her mother imprisoned in the Congo for being Rwandan, then become separated during their escape to Belgium. They were eventually reunited, but Lous was a troubled teen and spent a period of time adrift before pulling her life together in pursuit of music and art. There's much to uncover and discover here. This Tiny Desk (home) concert is a deep journey.

Today would have been Lou Reed's 79th birthday. We'll be celebraing the music of this rock icon by playing music from his 50+ year career from The Velvet Underground and his 20 solo albums Thursday at 11p on #featuredartistoftheweek

Today is the anniversary of the release of Pink Floyd's "Dark Side of the Moon".After its release on 03/01/72 it stayed on the Billboard charts for 736 weeks.
If there were to be a #ClassicRewind, this would be it. Check it out Wed. at 11p (& maybe watch "The Wizard of Oz" too)

Brighten up this dreary start to our week with "Place Names", the brand new track from @nickwaterhouse. It's the #SongOfTheWeek at our website.

Today is Mike Peters' birthday! That's why we'll be playing an hour of The Alarm and Big Country tonight at 11 with Stu.

On Saturday the Dave Matthews Band album "Everyday" turns 20! Check it out tonight at 11 on "Classic Rewind".

Released on February 27, 2001 the band's fourth release had critical success and was the 5th biggest selling album that year!

We're celebrating Dave Wakeling's birthday an hour early tonight at 11 on Featured Artist Of The Week. Get ready for some #EnglisBeat & #GeneralPublic. Maybe we'll even play a song he performed in our studio.

The Icelandic composer and pianist takes us inside his Reykjavik studio for his Tiny Desk quarantine set.

The gospel trailblazer and his powerhouse choir close out Tiny Desk's Black History Month celebration with a moving performance from his studio in Arlington, Texas.

The poet, rapper and singer-songwriter joins us from Zambia for a visually stunning quarantine concert, part of Tiny Desk's Black History Month celebration.