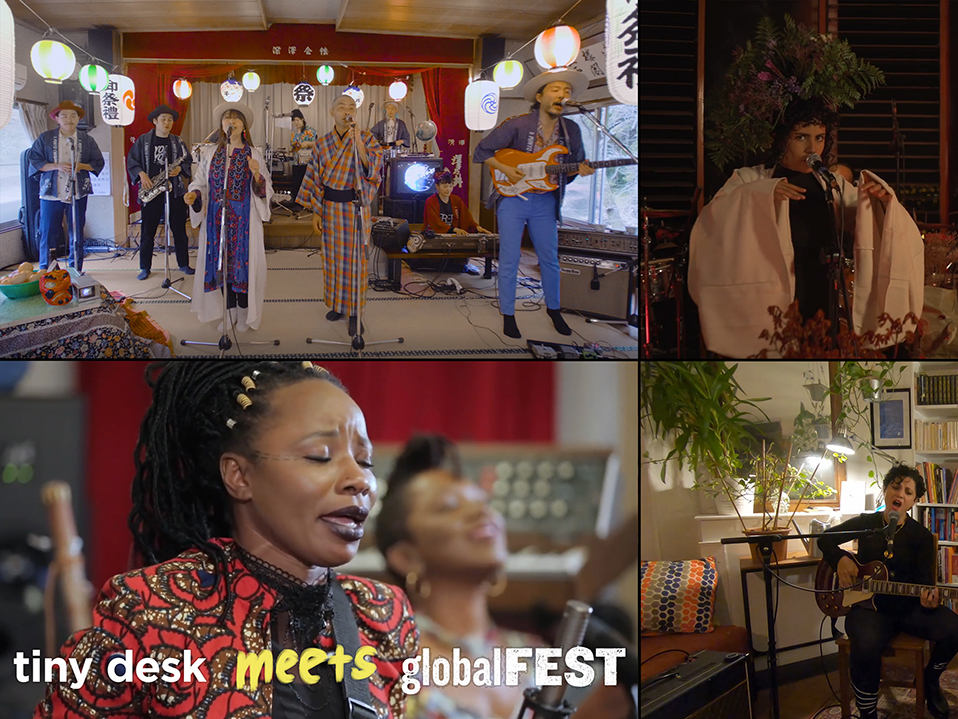 The Tiny Desk is teaming up with globalFEST this year for a thrilling virtual music festival: Tiny Desk Meets globalFEST. The online fest includes four nights of concerts featuring 16 bands from all over the world. From Monday, Jan. 11, through Thursday, Jan. 14, we'll be streaming new performances at 8 p.m. ET on NPR Music's YouTube channel and NPR.org.

Every January, I attend globalFEST at a New York City nightclub and see some of the most fantastic music I'll experience all year. Now, given the pandemic's challenges and the hardening of international borders, NPR Music and globalFEST is moving from the nightclub to your screen of choice and sharing this festival with the world. Each night, we'll present four artists in intimate settings (often behind desks donning globes), and it's all hosted by African superstar Angélique Kidjo, who performed at the inaugural edition of globalFEST in 2004.

Below you'll find short descriptions about each act, written by the globalFEST team.

Min'yō folk music was originally sung by Japanese fishermen, coal miners and sumo wrestlers hundreds of years ago, and the Minyo Crusaders are on a mission to make these songs relevant to an international audience. For their performance, the Crusaders found a unique take for their desk: a "kotatsu," which is a heated Japanese table traditionally used for gathering in the winter months.

From the candle-lit home of their lead singer, Hit La Rosa comes in hot and doesn't stop until the final measure. The band explores the many facets of Peruvian cumbia music, infusing it with pop music, folklore, jazz and dancehall to produce its distinctive grooves and hooks. The band's precise-yet-dreamlike music and punk sensibility all come together to make music that explores life's shadowy sides. Despite living through a political crisis in Peru, the band brings a message of hope and joy in the midst of struggle and upheaval.

From a studio space in Brooklyn, Guinean native Natu Camara mixes West African soul, rock and pop music. As a builder of inter-cultural bridges, Camara uses her songs to bring people together, weaving a tapestry of musical stories and visions of her beloved home.

Tunisia-born singer Emel first performed at globalFEST in 2015, the same year she performed her song of Tunisian Revolution, "Kelmti Horra," at the Nobel Peace Prize Concert. Emel was hailed by NPR as a "21st century catalyst for change." She created her latest album, The Tunis Diaries, equipped with only a laptop, tape recorder and a crowdsourced guitar after she was unexpectedly quarantined in her childhood home in Tunis last spring.


Sea Shanties, 18th Century Sailing Chants, Are Back In Style

The U.S. Navy Band has joined in the sea-shanty-pop-culture-fusion with a salty, weathered rendition of Taylor Swift's "We Are Never Ever Getting Back Together."

NPR Music will host an online listening party for the British pop artist's debut album, featuring a conversation with Arlo Parks herself.

Lady Gaga and Jennifer Lopez will co-headline the inauguration of President-elect Joe Biden on Wednesday. The day features a variety of performances from other musical artists.