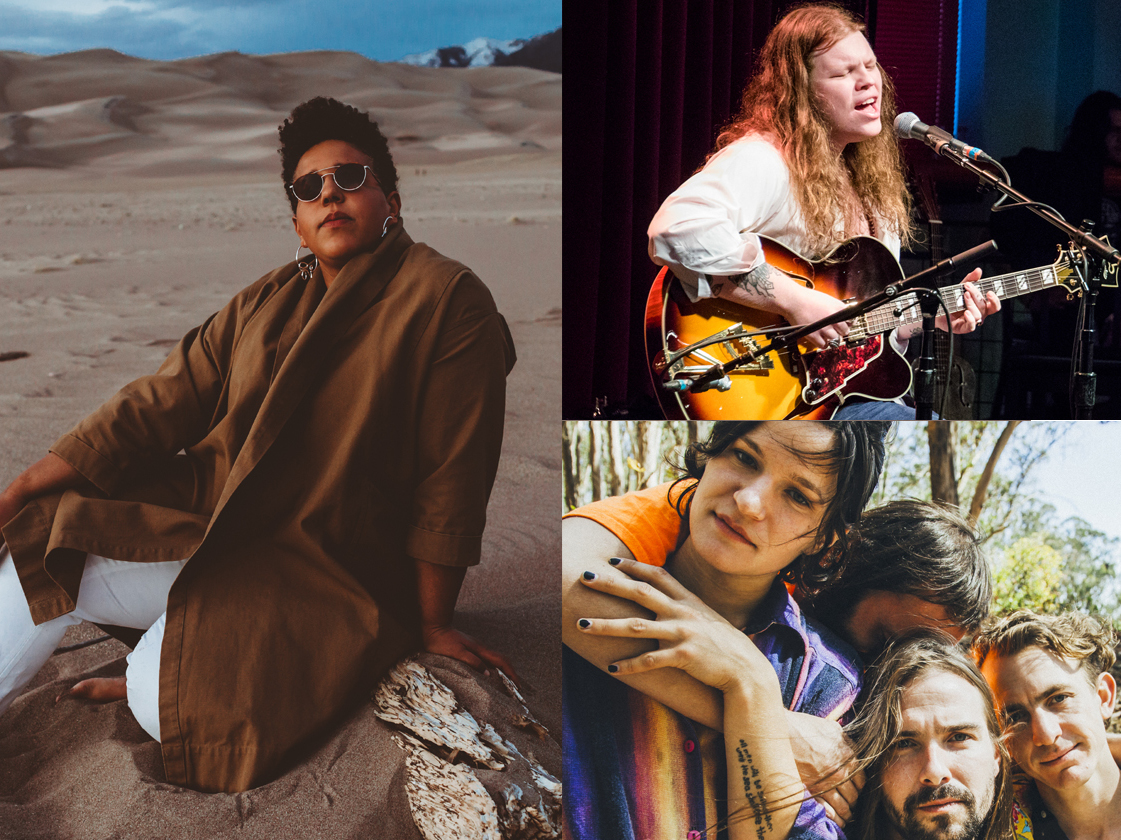 When the 63rd annual Grammy Awards ceremony airs on Sunday, Jan, 31, the show will probably be unlike any Grammys we've seen before. The pandemic has changed the music industry in all sorts of ways, and that includes its "biggest night" — but there's still a ton of great music to celebrate, and many of this year's nominated artists are World Cafe alumni.

For the first time ever, every single nominee for Best Rock Performance is a woman – and almost every one of them has visited World Cafe: Big Thief, HAIM, Grace Potter, Phoebe Bridgers and Brittany Howard have all done sessions over the last few years. Phoebe Bridgers also snagged a few other nominations, including one for Best New Artist, and Brittany Howard is one of the most-nominated artists this year with a total of five.

Last year, the big story at the Grammys was Billie Eilish. She swept the Big Four categories in 2020 and while she won't do the same this year, she was nominated for a handful of awards, including song of the year and record of the year for her track "Everything I Wanted." Eilish recorded an exclusive live version of that track for World Cafe — and you can hear it below. Also making an appearance with four nominations, including two of the major categories (record of the year and album of the year): Austin rock band Black Pumas.

Lots of familiar faces in the American Roots music categories, too. Marcus King's first solo album, El Dorado, is nominated for best Americana album, along with the latest LPs from Bonny Light Horseman, Lucinda Williams, and Sarah Jarosz. The latter, who seems to be on an unstoppable rise this year, was also nominated in the best American Roots song category for her tune "Hometown." And in what might be the most heartwarming story to come out of the Grammy nominations this year, Don Bryant – who talked about his half-a-century-long career as a songwriter when he visited the World Cafe earlier this year - was nominated for his very first Grammy at the age of 78, for his album You Make Me Feel.

Get acquainted (or re-acquainted) with the artists and albums that were nominated this year by listening to their World Cafe sessions.

Big Thief had a pretty remarkable 2019. The band put out two beautiful albums, U.F.O.F. in May and Two Hands in October. Paired together, these albums present a larger picture of the band at the height of its powers, thinking and performing beyond the traditional album-tour cycle. The records, as lead singer Adrianne Lenker puts it, are spiritual siblings, or the opposite sides of a coin. While they're both Big Thief records through and through, the sound of each is dramatically different than the other. Read more.

Over the last several months, the world has changed pretty quickly. And for HAIM, those changes meant the band had to make the tough decision to postpone its album, Women In Music Pt. III. But even though the sisters of HAIM can't tour right now, they're still around to chat. Danielle, Alana and Este of HAIM joined me from where they're self-isolating to discuss that decision and to talk about the songs they released as singles. Even though they can't all be together right now, you can still hear the love and support between them, and that's a theme that carries over into their new music. Read more.

A shift in sound because of a shift in life? Naturally. The transition from midnight to daylight, so to speak, has been significant for Grace Potter. After making 2012's The Lion The Beast The Beat with her band The Nocturnals, Grace went on to pursue a solo career. Midnight, her solo debut, came out in 2015 and Grace realized on the road that she'd fallen in love with her producer, Eric Valentine. Flash forward: they've gotten married, had a baby and also had to figure out how to transition between work space and personal space while working on Grace's latest album. Read more.

A few months into the pandemic, in mid-June, Phoebe Bridgers released her second full-length solo album, Punisher. Almost immediately, social media lit up with people talking about how they connected with it: from someone wanting to spend an entire appointment playing it for their therapist to another person skipping a movie with their roommate in order to take an aimless walk and listen. Punisher quickly became an album for the moment, one that could make a person feel less alone in a time of self-isolation. Read more.

When you're lucky enough to work at a place where you talk to musicians, you get excited. It's easy to have a good experience talking with the people whose music you enjoy. It's even easier to tell random people how much you enjoyed the company of those musicians and the music they made. The problem, of course, is that it's easy to get hyperbolic and lost in the message. If every artist is the greatest artist that ever came through the doors of World Cafe, then 'great' means very little. So, when I tell you that you are in for, in my opinion, one of the best performances in this venerable show's history, I am assuredly not being hyperbolic. Read more.

You might think that sitting down with one of music's biggest superstars would be kind of intimidating — that someone who has spent the last year breaking sales records and accepting countless awards would maybe be hard to relate to. But within about 30 seconds of hanging out with Billie Eilish and her brother and creative partner, Finneas O'Connell, you could almost forget that these are two of the most influential artists on earth right now. You don't forget, of course, because they approach their music with the utmost thoughtfulness and professionalism – but their openness, ready laughter and casual ease that comes with being not just siblings but lifelong friends reminds you that at the core of it all, they're still two young people having a lot of fun doing what they're doing. Read more.

Grammy Award-winning musician and producer Adrian Quesada was just about to get in the car after having lunch with a producer friend in Austin when he casually tossed out the question, "Oh hey! By the way, do you know anybody who would, like, sing on these songs?" Quesada had been on the hunt for the right voice to bring the soulful sound he heard in his head to life on a new project to no avail, and asked his friend whether any names popped to mind. Quesada's friend asked if he had heard of Austin-by-way-of-LA busker Eric Burton? Quesada did some digging and discovered love at first listen. They became Black Pumas, a band that caught major buzz at SXSW in 2018, a mere month after its formation. Read more.

It feels like 23-year-old guitar prodigy Marcus King was always destined to make music. He's from a multi-generational musical family and has had his own band since his teenage days in South Carolina. He released three studio albums with the Marcus King Band, but about a year ago, it was time for a change. King moved to Nashville and started hanging out with Dan Auerbach. With Auerbach's help, King released his debut solo album, El Dorado. Read more.

Lucinda Williams is one of those artists whose influence goes far beyond her own work. I can't count the number of musicians I've spoken to who cite Lucinda as someone they admire and whose songwriting has shaped their own. She's released 20 albums over the last four decades; throughout that time, she's has never allowed herself to get slotted in one lane – she's forged her own path and has always spoken her own truth. She's also incredibly fun to talk to, as you'll hear in this session. She's funny, clever and can tell a hell of a good story. Read more.

Singer-songwriter Sarah Jarosz has been touring since she was 16 years old, so the 2020 quarantine has been an especially unusual year for her. Her new album, World on the Ground, was made in collaboration with producer and musician John Leventhal, and it takes you to her hometown of Wimberley, Texas, where she introduces you to characters and settings both real and imagined. Read more.

If we're doing our job right, when you listen to World Cafe you experience what it's like when someone plays for an audience of one. That's generally how I feel when I'm sitting in a room with musicians, just feet away from a hopefully spectacular performance. So when I say this session really captures that spirit, I hope you go with me, especially when you consider what musical traditions are being weaved through the music of our guest, Bonny Light Horseman. Read more.

The late 1960s and early '70s were an exciting time for music in Memphis. Hi Records was churning out R&B and soul hits, thanks in part to Don Bryant. He got his start working with Willie Mitchell at Hi Records, first as a performer before shifting his focus to being a staff songwriter. But he never lost his love of performing. In 2017, almost 50 years after releasing his debut record, he released his second secular album, Don't Give Up On Love. And this past June, he put out his third, titled You Make Me Feel. Read more.

The National's lead singer set out to create something warm and welcoming on his new album, Serpentine Prison.

Cozy Up With Andrew Bird As He Performs Holiday Songs From 'Hark!'

Bird's holiday album is a collection of covers and originals that some might not view as Christmas material at all.

Owen Pallett Is A Home-Recording Wizard

In this session, what you're going to hear are solo performances — just Pallett, using effects and looping to create layers of sound.

Hear World Cafe Interviews With 12 Of This Year's Grammy Nominees

Get acquainted (or re-acquainted) with the artists and albums nominated this year by listening to their World Cafe sessions.