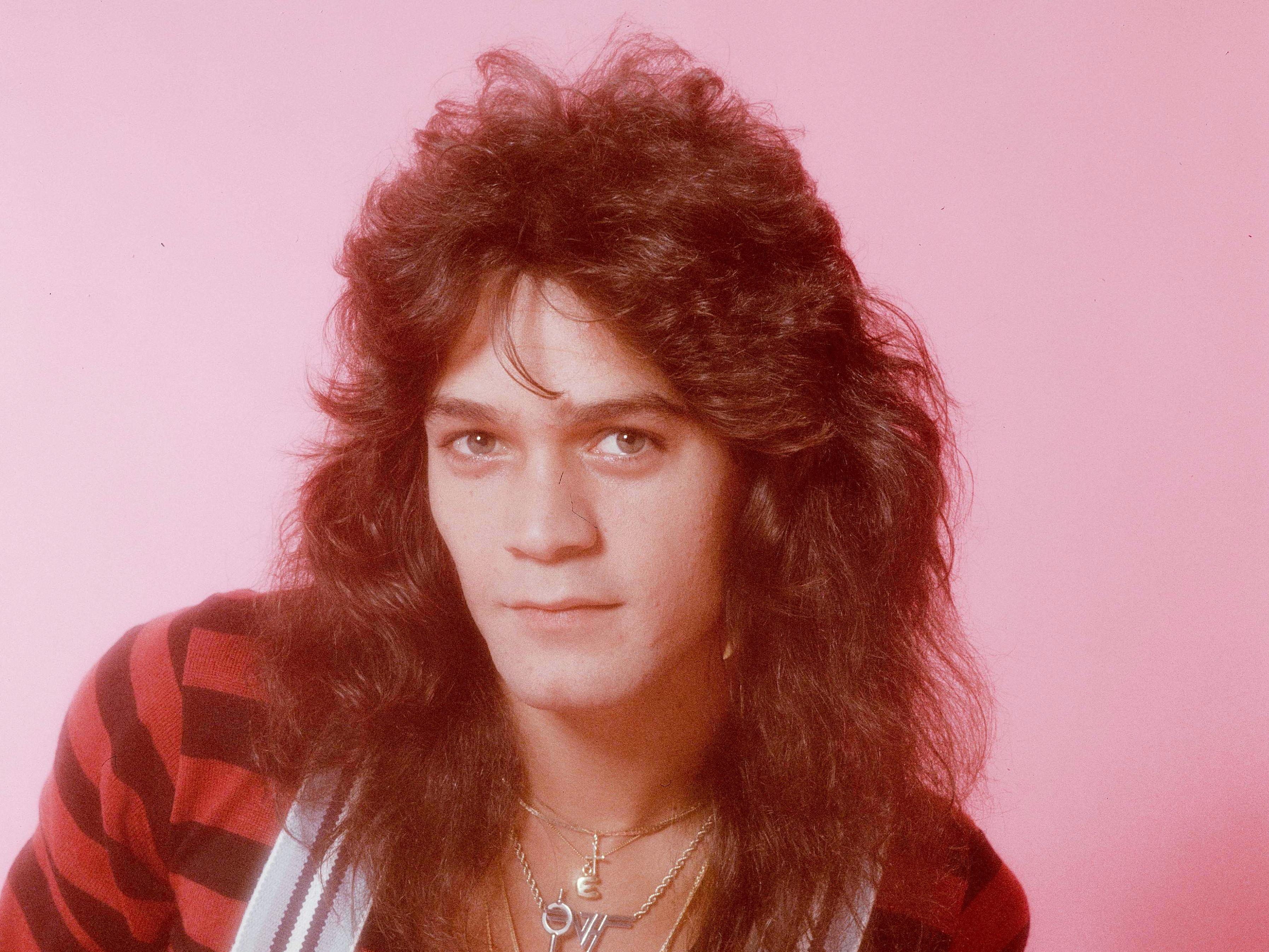 
Few early MTV videos captured the personality of a band better than Van Halen's "Jump." In the effervescent 1984 clip, David Lee Roth primps his hair and shoots smoldering looks directly at the camera as he lip-syncs, in between roundhouse kicks and various other gravity-defying acrobatics. The rhythm section, bassist Michael Anthony and drummer Alex Van Halen, backs up Roth's enthusiasm with their own: Behind a massive kit, a sweaty Alex Van Halen bashes away with no-nonsense precision, while Anthony goofs around with his bandmates and extends the lighthearted vibe.

But throughout the video, the giddiest band member of all is Eddie Van Halen. Every time the camera pans his way, Van Halen can barely contain his glee: He laughs at Roth's antics, unleashes exaggerated guitar moves and flashes beatific grins while miming to the music. And when the video zeroes in on a close-up of his face as he launches into the song's iconic guitar solo, he breaks into a confident smile, tempered with a hint of bashfulness. Van Halen's look is one of pure pleasure — not arrogance, but deep satisfaction.

Eddie Van Halen, who died Oct. 6 at the age of 65 from throat cancer, is rightfully feted for his incredible solos, as well as his musical versatility and innovative guitar technique. He and the rest of the band were also fortunate to be well-suited for the image-conscious video age, starting with their unique approach to fashion: Roth sometimes wore over-the-top furry boots (a style later more closely associated with rave culture) while Eddie and other band members indulged a penchant for primary colors and animal print. They helped to define the raunchier, '80s iteration of the sun-kissed, California-rock fantasy.

Not only were they charismatic performers, but they also had massive pin-up appeal – during its commercial peak, Van Halen were one of several hard-rock groups (e.g., Styx, Cheap Trick, REO Speedwagon, Journey) embraced as such. These groups were following the lead of KISS, who had been teen idols since the late '70s. (Dig the 1982 interview with the demure-looking "masked marvel" Gene Simmons, or larger-than-life Paul Stanley next to Leif Garrett.) "Rock's Bad Boys: They're G-O-O-D!" proclaimed a 1982 Tiger Beat cover, advertising coverage of Van Halen, Journey and The Police. Multiple poster and calendar specials included the band, while a 1983 Tiger Beat Super Annual promised "mindblowing rock reports" on four MTV-embraced bands: Duran Duran, Journey, Loverboy and Van Halen. A June 1982 U.K. Tiger Beat cover even featured a bevy of cute-boy brunettes — Scott Baio, Rick Springfield, Ralph Macchio — and an inset of Van Halen and Roth looking slightly goofy and beach-ready, respectively.

Rock purists might balk at Van Halen being framed as a pop band, alongside fresh-faced actors or multi-talented threats such as Rick Springfield. However, the group's distinctive sound arose because they fused hard rock and heavy metal with inspirations culled from decades of popular music: Distinctive and stacked backing harmonies, driven by Michael Anthony's "piccolo trumpet"-like vocal tone, drew influence from The Beatles and soul vocal groups. While playing at Southern California high schools and backyard parties in the mid-'70s, Van Halen cultivated a reputation as a feel-good dance band who spun through glam, metal and hard rock hits. Yet their playbook notably also included Stevie Wonder's "Superstition"; surviving audio of a 1976 live cover finds Van Halen chopping out funky, acidic blues riffs and solos, a nod to his Jimi Hendrix fandom.

Even after the band signed a record deal, cover songs remained a part of Van Halen's repertoire: a scorching cover of the Kinks' "You Really Got Me"; a simmering, heartbroken cover of the Linda Ronstadt-popularized 1963 R&B song "You're No Good"; and Martha Reeves & The Vandellas' Motown classic "Dancing in the Street." So no, Van Halen weren't hard rock purists – and that kept the four relevant, even as the genre's boundaries morphed and stretched. (For example, on 1984, Eddie Van Halen applied his classical piano training to synthesizers, leading to fluid and graceful melodic compositions.)

In the '80s, the embrace of rock stars as teen idols (or "ROCK HUNKS," as one magazine cover later put it, above a photo of bandanna-wearing Bruce Springsteen) also reflected how the genre changed thanks to MTV. With the increasing popularity of music videos, artists became larger-than-life TV stars who were as recognizable as popular actors. Bands such as REO Speedwagon, who had spent years cultivating a career on the road, now had greater mainstream visibility and earned breathless teen magazine headlines ("Lettin' loose with Gary and Bruce!").

Like other teen idols — and popular rock bands of the era — Van Halen's principals were slotted into prescribed personas. David Lee Roth was the wild child, an over-the-top, even cartoonish presence who was the life of every party, far beyond last call. His steely pouts oozed bronzed '80s rock glam: Via laser-etched cheekbones framed by a layered blonde mane, he conveyed runway-model composure. Eddie Van Halen, meanwhile, was the brooding, sensitive musician who embodied contradictions— he was both a bad boy and someone your parents would approve as a boyfriend — but didn't necessarily acknowledge, or maybe even realize, his heartthrob status.

After all, in one 16 Magazine band poster, Van Halen is charmingly in need of a haircut; his shaggy hair and bangs nearly cover his eyes. In 1984, Rolling Stone caught him getting misty-eyed when discussing his brother Alex's recent divorce — and at the same time quoted him responding to his tears in a decidedly non-PG way: "I mean, 20 years ago, men were looked at as p*****s if they cried. Hey, g*******t, I'll cry if I want to. I'll get horny if I want to, I'll laugh, whatever. I'm incapable of holding things in." And as a soloist he was flashy and soulful — a tough combination to nail, as it required pinpoint technique and emotional depth.

Eddie Van Halen's imperfections and gruffness scanned as adorable and sensitive, however – a kind of non-threatening, sweet vulnerability that provided a counterpoint to Roth's brash, hyper-charged sexuality. These contrasting personalities certainly caused real-life tension within Van Halen — Roth and the band famously parted ways in the mid-'80s — but they also made for irresistible teen magazine fodder, especially after Eddie Van Halen married beloved One Day at a Time actress Valerie Bertinelli in 1981.

The power couple's opposites-attract vibe — he the reckless rocker, she a Hollywood sweetheart — naturally drew intense attention from the tabloids. (They once appeared on the cover of a celeb-geared publication called The Lovebook, with the somewhat contradictory headline: "Hollywood's Cutest Couple – Is rock ruining their romance"). Accordingly, the musician's image was softened considerably. A photo of the happy couple also appeared in a Tiger Beat spread about dating tips, with a wholesome caption about how they "didn't rush down the aisle — marriage is a very important proposition!"

In a Teen Beat pull-out poster, the rocker's hair is rumpled and feathery, as if tousled by a gust of wind, and he's smirk-grinning like he knows a good secret and can't wait to share. In a mischievous move, the guitarist sports a Teen Beat ringer T-shirt, as if he knows the wardrobe choice makes the photo extra cheeky. Van Halen also appeared shirtless on the cover of a Teen Stars "rock special" magazine, directly next to a photo of Duran Duran frontman Simon Le Bon, who was dubbed "Rock's Pop Hero." 16 Magazine once featured a full-page photo spread of Eddie with his black-and-white Frankenstrat guitar, caught in mid-strum with a look of surprise and delight on his face.

This onstage giddiness went a long way to explain Eddie Van Halen's heartthrob appeal. His performances upended the stereotype that a guitar virtuoso should be stoic, or the perception that a rock artist had to be serious to be taken seriously. "He's so special and soulful when he plays," Hagar said in the band's Rock & Roll Hall of Fame induction video, while Roth added. "Not just in terms of speed, but how he articulates the notes, his accuracy, his focus. There's a whole lot of emotional content to the way that kid plays." There was no artifice involved in Eddie Van Halen, no choreographed stage joy — just genuine exuberance that he was lucky enough to be in a band bringing good-time fun back to rock and roll.

The prolific bassist and two-time Grammy-nominated producer and guitarist come together to distill the sonic creativity of their album, Notes With Attachments.

In 2021, "punk" can mean a lot of different things. It's an attitude, a viewpoint – it can even be a music genre. But the South London band Goat Girl embodies its own version entirely.

Well ahead of a celebratory Central Park concert announced by Mayor Bill de Blasio for August, New York City's venues are coming back in June for vaccinated audiences.

Michelle Zauner of Japanese Breakfast performs for a live virtual audience and talks to World Cafe about everything from her recent memoir, to the change in sound on her latest album, Jubilee.

Join us in an online listening party for Sleater-Kinney's new album. With World Cafe's Raina Douris in the host chair, we'll feature a live conversation with Carrie Brownstein and Corin Tucker.