TRENTON, N.J. (AP) — New Jersey’s governor has signed a measure that would remove most local control from where and how offshore wind energy projects come ashore. END_OF_DOCUMENT_TOKEN_TO_BE_REPLACED

WILDWOOD, N.J. (AP) — A 13-year-old girl was hit in the face by a seagull while riding an amusement park ride in New Jersey. END_OF_DOCUMENT_TOKEN_TO_BE_REPLACED

Song of the Week

Over the past 16 years, Rebelution has had nearly everything a band could ask for: chart-topping albums, hundreds of millions of streams, a GRAMMY nomination, even their own festival in Jamaica. The only thing they haven’t had, it seems, is time. “When COVID hit, we found ourselves in uncharted territory,” says frontman Eric Rachmany. “Suddenly we were just sitting still, which was a completely new experience for us.” Difficult as it was to leave the road behind, pressing pause proved to be a blessing in disguise for the band, one that led to their captivating new album, In The Moment. Recorded remotely in the midst of the coronavirus pandemic, the collection is deliberate and wide-ranging, infusing the quartet’s soulful, exhilarating brand of modern reggae with addictive pop hooks, alt-rock grit, and hip-hop grooves. Founded in Isla Vista CA, the members of Rebelution have followed their instincts to remarkable success since the release of their breakout 2007 debut, Courage To Grow. In 2009, the band topped the Billboard Reggae Chart for the first of what would be five consecutive #1 records; in 2014, they boasted the highest-selling reggae release of the year; and in 2017, they garnered a GRAMMY nomination for Best Reggae Album. Rebelution’s transcendent live performances, meanwhile, took on legendary status, earning the group sell-out headline shows everywhere from Red Rocks to The Greek Theatre along with festival slots at Bonnaroo, Lollapalooza, ACL, Glastonbury, and more.

90.5 The Night is only possible thanks to the support of our members. Donate to Brookdale Public Radio now to keep the music playing.

Things have been heating up out there, so we asked our DJs what songs invoke the summer heat.  Here’s what they had to say… END_OF_DOCUMENT_TOKEN_TO_BE_REPLACED

Michael Squillace of the Jammin’ For Jaclyn benefit recently chatted with (virtually) Jeff Raspe and played a couple of great songs.

Support Brookdale Public Radio with a pledge online at http://90.5TheNight.org/donate

even more recent or check out the whole archive alphabetically 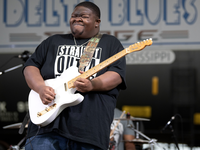 Clarksdale, Miss., where blues guitarist-singer Christone "Kingfish" Ingram hails from, is "pretty much the mecca of the blues," Ingram says in an interview with NPR's A Martinez on Morning Edition.

For Questlove, The Pandemic Meant Embracing Quiet — And Buying A Farm

The Tonight Show music director has been branching out: In addition to buying a farm, he's making his directorial debut with Summer of Soul, a documentary about a 1969 concert series in Harlem.

Back Together And Blown Away: The Boston Symphony Orchestra Returns To Tanglewood

The Boston Symphony Orchestra recently returned to its storied summer home, Tanglewood, after the pandemic canceled last season. With reopening comes normalcy, as well as an opportunity for growth.

This year, our ears have been craving songs that made us move – think of these 2021 releases as songs to play as we "return to outside."

Stay Or Go? 31 Chill Songs, No Matter Your RSVP

Roséwave is an entire vibe, but has never sounded so vibey. Whether you're on the way to the function or still shaking off outside jitters, this summer mix is for you.

Jazz is alive and thriving! Each month, the Jazz Night staff curates a playlist of new music that caught our attention. For June, work by Brandee Younger, Kamasi Washington, Hiatus Kaiyote and more.

No Sophomore Slump: A Playlist Of Songs From Great Second Albums

The dreaded "sophomore slump" is no more — featuring Nirvana, Prince and Björk, World Cafe shares a playlist of those who have not only avoided the dreaded label, but transcended it.